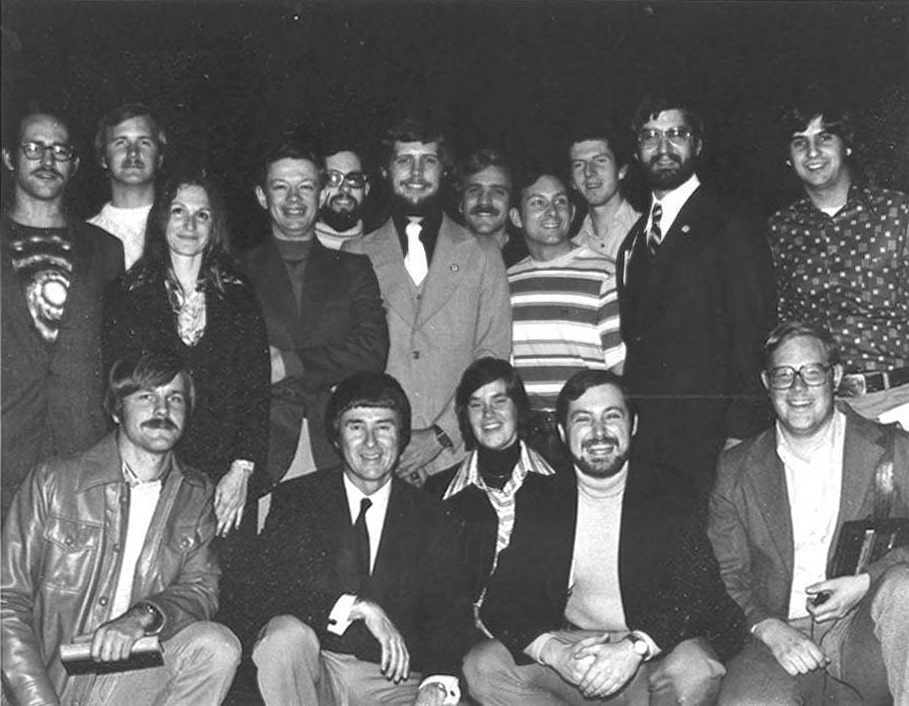 Co-Founder Anita Gale in the middle of the bottom row; next to her the gentleman in tie is Dr. Gerard O’Neill
Picture taken at L5 Society event, Santa Barbara, California, USA, late 1970s or early 1980s

Your presence here is part of a long history of Space Settlement Design Competitions.

It all started in 1983, during planning by the Boy Scouts of America for the 1984 National Exploring Conference. The Science and Engineering Cluster steering group decided to do something cool about space. One problem: nobody on the committee knew much about space. But Evelyn Murray from the Society of Women Engineers knew Anita Gale, who worked on the Space Shuttle program. Letters followed, recommending and expanding ideas, and concluding with a telephone call between Anita in California and Rob Kolstad (a steering group member) in Texas. During that conversation, they outlined the basic structure of the event, that it would be both a design competition and a management simulation game. Anita and cohort volunteer-for-many-things Dick Edwards wrote the materials for the game. The first Space Settlement Design Competition was conducted at Ohio State University (between thunderstorms and tornadoes) in August 1984, with about 75 participants. It was wildly successful. Even astronaut Story Musgrave stopped by to watch design presentations.

The Explorers’ Science and Engineering Cluster (led by Brian Archimbaud) was so impressed by this event, they decided to make sure it would continue. They convinced Dr. Peter Mason and the Space Exploration Post at NASA’s Jet Propulsion Laboratory in Pasadena, California, to try it locally. They ran the first SpaceSet (Post member Nathan Hawkins invented the name) in 1986. Eighteen SpaceSet competitions were conducted at JPL, with continuing participation by Anita Gale and Dick Edwards, Rob Kolstad, and Dr. Mason. As many as 160 students participated each year, with varying design challenges. Competition organizers requested space settlement designs in Earth orbit, on Earth’s moon, on and in orbit around Mars, and on and in orbit around Venus (including global atmospheric alterations to make it habitable). One Earth orbiting settlement could move to another solar system.

The first National Competition was organized when SpaceWeek International Executive Director Brian Archimbaud (same guy) decided to include a Space Settlement Design Competition in 25th anniversary celebrations of the Apollo 11 lunar landing, in 1994. Before he figured out how to get back in touch with Anita and Dick, he happened to recognize Anita at the other end of a wine-tasting counter at the Snoqualmie Winery in North Bend, Washington. The National event took place July 17 through 19, 1994, in Washington, D.C. Astronauts and Cosmonauts who volunteered for this event were so impressed with its educational value, they insisted that it continue as an annual event.

After Brian Archimbaud left SpaceWeek International late in 1994, the organization decided not to continue supporting the program. Epcot in Walt Disney World agreed in 1995 to help Anita and Dick meet the promise made to the astronauts and cosmonauts. In 1996, the Competition acquired new hosts, The Center for Space Education and NASA – Kennedy Space Center. Sponsorship by Boeing made continuation of annual International Space Settlement Design Competitions possible. In 2001, the KSC venue of the Competition moved to the Kurt Debus Conference Center at the KSC Visitor Complex. In 2005 this facility was unavailable due to a Space Shuttle flight, and alternate arrangements were made at hotels in Titusville. When a 2006 Space Shuttle flight again made KSC facilities unavailable, Competition organizers decided to move Finalist Competitions to the Gilruth Center at Johnson Space Center. In 2014, the Finalist Competition moved back to the KSC Visitor Complex and Center for Space Education due to a scheduling conflict at JSC.

In addition to SpaceSet at JPL, local Design Competitions have been conducted for NASA’s Dryden Flight Research Center, NASA Johnson Space Center, and NASA White Sands Test Facility. The idea of Semi-Finalist Competitions selecting International Finalist teams was first suggested by Mark Shaw from Australia, and first implemented by Abhishek Agrawal in Delhi, India, in 2004. Australian Semi-Finals started in 2007. In 2008, the JSC event was declared an International Semi-Final, and Regional Competitions selected Finalists from Latin America and Eastern Europe. A UK Semi-Final was added in 2009. In 2012, at the request of the UK Space Agency, Anita developed a stand-alone mini-competition RFP for a smaller habitat. “Mini” scenarios require less infrastructure and planning, and can be run more often with fewer trained volunteers. In 2018, Semi-Finals were added in the Northwest and Southwest U.S.; the first Canadian Semi-Final was added in 2019. Also in 2019, a parallel “Tournament” format using “mini” scenarios is being prototyped to enable more students to experience Space Settlement Design Competitions.