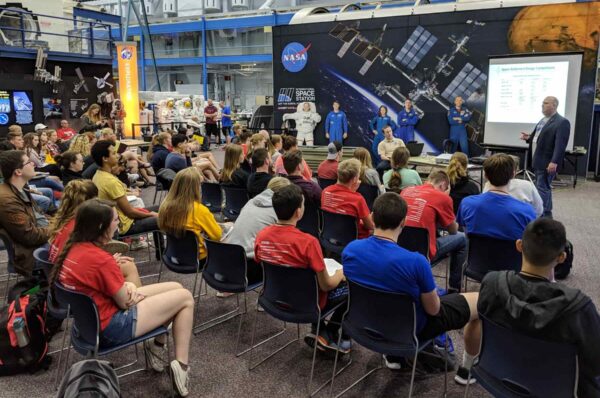 Space Settlement Design Competitions®️ (SSDC) presume that a customer organization in the future is asking contractors to submit designs for a contract to build an ambitious project in space.  The SSDC interaction between customer (SSDC organizers) and contractors (student teams) emulates the relationships between real customers and contractors in industry—especially the aerospace industry in the United States.  Just as in the real space industry, the customer asks for responses to a Request for Proposal (RFP) describing the requirements for what it wants, and each contractor responds to the RFP with a proposal describing how it intends to build systems that will provide what the customer wants.

The future customer for SSDCs is The Foundation Society, an organization founded for the specific purpose of establishing settlements of its members in space.  In the “future history” of SSDC scenarios, the Foundation Society establishes the first permanent human settlement in space, and names it Alexandriat, recognizing Alexander the Great’s expansion of his civilization into new territory.

The SSDC future history also presumes that in the relatively near future, several major aerospace companies form the Space Enterprise Applications Consortium (SEAC), which pools corporate resources to develop space infrastructure, and all SEAC companies agree to buy each others’ services in space.  The companies turn to the Foundation Society to lead SEAC projects.  NASA assists commercial development in space by reprising the role it was chartered to serve for aircraft as NACA in 1915:  solving generic problems of spaceflight and human safety in space.  NASA also serves as a customer for companies’ services, granting contracts for them to build its exploration and science missions.

The Foundation Society is instrumental in establishing space property rights:  a company or even a person can claim an orbital location, an asteroid smaller than 10 miles in diameter, or a plot of land up to 10 miles by 10 miles in size, so long as it does not interfere with other active claims.  A claim remains valid so long as the claiming entity actively uses its claimed property; claims not in active use for four Earth years revert to unclaimed status and are available for another entity to claim.

Anticipating that large quantities of cargo will be shipped in cis-lunar space, the Foundation Society establishes a standard for cargo containers that is compatible with SEAC members’ launch and space vehicles.  Cargo Accommodations in Standard Space Shipping Containers (CASSSC) units enable vehicles to ship almost any type of cargo with standard interfaces for mechanical installation, power, and avionics.

Many aspects of the future history written for SSDCs are actively being discussed in conferences attended by space professionals right now, e.g., public-private partnerships, space property rights, commodities being supplied from lunar materials, manufacturing in space, and cargo interface standardization.